By JeffreyW
March 3, 2019 in The rest of the US and International. 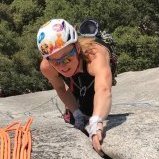 It can't be said enough: Jeff and I are so blessed, and so thankful that we got to climb Fitz Roy! Nothing is ever guaranteed, and certainly not alpine climbing in the Fitz Roy range. Everything