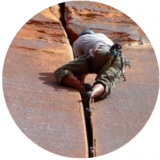 Weather inversion(?) in winter at rainier